Beyond the Politics of Communion, a 2,000-Year-Old Holy Mystery

It was early Wednesday evening at the adoration chapel at St. Clare’s Convent, home to the Sisters of Life in northeast Washington. Light streamed through the blue and yellow glass windows, fading in and out with the clouds.

On the altar, before pink hydrangeas, stood a liturgical vessel shaped like a golden sunburst. And inside the sunburst, called the monstrance, was the Blessed Sacrament, the consecrated eucharist bread that Roman Catholics believe to be the body of Jesus.

A young woman stepped into the utter stillness and knelt low. Hannah Hembree, 23, has been coming to eucharistic adoration, the practice of revering the presence of Jesus in the eucharist, almost daily since she quit her job two weeks ago. She came to adore Jesus, just to talk with him, she said afterward.

“People can get wrapped up in the political stuff, but it all comes back to prayer,” she said of the eucharist. “Prayer is about relationship. It is about spending time with our Lord.”

For the past week, one of the most ancient and sacred rituals of Christianity has become the focus of a high-stakes showdown between conservative Catholic clerics and the nation’s political leaders as well as a proxy battle in the abortion wars. This month, the U.S. Catholic bishops voted to draft a statement on the theology and practice of the eucharist, which some hope to use as theological justification to deny communion to President Biden and other Catholic politicians who publicly advance beliefs that are not aligned with the church’s.

But for many Catholics across the United States, the eucharist, also called holy communion, is something wholly apart from partisan skirmishes. It is quite literally about God.

In the celebration of Mass, Catholics remember the life and death of Jesus on earth. The priest presides over the rite of the eucharist in which bread, called the host, and wine become consecrated, or holy. Catholics then partake of the bread and wine, which they believe have been transformed into Jesus’ body and blood. Between Masses some Catholics also honor the consecrated bread, now the body of Jesus, in adoration chapels.

The sacrament is a holy mystery. It is the most personal and intimate way Catholics connect with God and one another, part of the weekly or even daily routine.

Ultimately, the eucharist is considered the path to salvation: “Whoever feeds on this bread will live forever,” Jesus told his disciples in the Gospel of John.

Looming behind the U.S. bishops’ plans to issue new guidance on the sacrament is declining Mass attendance and the sense that many Catholics have lost a spiritual connection with the ritual and may not even understand the church’s teachings about it. Only about 30 percent of U.S. Catholics believe the core church teaching that the bread and wine become the literal body and blood of Christ; about 70 percent believe they are mere symbols, according to a Pew poll from 2019.

The sacrament is more than a set of theological beliefs. It wraps the divine and the human all into one, connecting the church and God across time and space.

Jennifer C. Reid, 50, recently rediscovered the altar candles from the day she received her first communion at St. Columbanus, the predominantly Black church in Chicago that she still attends. More than four decades later, the faded white taper candles, with wicks slightly burned, were still carefully stored in a long rectangular box with her initials on the bottom.

“I was sitting there holding them, flooded with those memories,” she said, remembering receiving the sacrament for the first time with her two sisters, in their little white veils, white dresses and white patent leather shoes.

Now Ms. Reid works at the church as a pastoral associate and distributes the bread to others at Mass after the priest has consecrated it. “I always look people in the eye before they receive communion because it means that much to me,” she said.

The Rev. Tulio Ramirez, a missionary priest from Colombia with the Yarumal Mission Society who works with Latin American immigrants in the Bronx, remembered celebrating Mass under a tree in Kenya. As the sun moved across the sky, people rose to carefully move the altar table, holding the bread and wine, to keep the eucharist in the shade.

“They wanted to show the reverence and respect to Jesus,” he said.

The church has seven sacraments, but the eucharist is the “sacrament of sacraments,” said the Very Rev. Aquinas Guilbeau, a Dominican friar and assistant professor of moral theology at the Pontifical Faculty of the Immaculate Conception at the Dominican House of Studies in Washington.

The church has been devoted to the sacrament for 2,000 years, Father Guilbeau said, since the night of the Last Supper when Jesus himself left the ritual as a memorial of his passion and death. Justin Martyr, an early defender of Christianity, wrote in the second century of the church partaking of the bread and wine. As the centuries went on, theologians debated the finer points of the sacrament as the faithful designed eucharistic liturgies, towering Gothic cathedrals and beautiful altars to honor it.

When the Protestant reformers in the 16th century rejected the Catholic teaching that the bread and wine substantively became the body and blood of Jesus, Catholic Church leaders affirmed the teaching, called transubstantiation.

“It is the devotion that is driving the theology,” Father Guilbeau said.

The sacrament has inspired countless accounts of miracles, and grand acts of heroism. Saint Clare of Assisi is said to have turned away a military attack in the 13th century simply by showing invaders the host. More recently, priests and nuns have rushed into burning buildings to save the consecrated hosts from fire. A scene in a 1989 movie about the martyred priest Óscar Romero depicts him walking past armed soldiers to rescue the host that had fallen to the ground, bullets spraying above him.

The sacrament can also prompt dramatic gestures of devotion by lay Catholics. Oscar Delgado was living in Mexico City in 1992 when he bought a lottery ticket on a whim and won $4.2 million. It was Holy Week, and Mr. Delgado knew he did not want to spend the money on himself.

Within a few years, he began funding the construction of a series of adoration chapels, where worshipers come to pray in the presence of the host. In Chicago Heights, Ill., for example, he installed a small chapel at St. Agnes Parish with a special focus on prayer for the sick and dying.

“If you’re receiving the eucharist, you’re saying, ‘I believe this is the true presence,’” said Mr. Delgado, who now lives in Minnesota. “This is for us the apex.”

Across the world, in different churches and cultures, the eucharist and its ritual practices can look and sound similar, signaling the shared communion of saints. But local approaches to access can vary widely, even between parishes that are geographically close.

In southeast Louisiana, Katie Corkern grew up in a parish in which it seemed that everyone received communion every week, no matter what. Divorced and remarried in her 20s, she began attending a new parish 30 minutes away with her second husband. There, the priest emphasized the importance of being “worthy”: Those who are not Catholic or are in a state of “grave sin,” for example, are discouraged from partaking.

Ms. Corkern, 38, took those admonitions seriously. Ineligible for the sacrament because of her divorce, she abstained from receiving communion for almost a decade. “Every time I would go to Mass, I would feel this deep, deep sorrow,” she recalled.

In 2017, with the help of her priest, she finalized the annulment of her first marriage and went through the official sacrament of matrimony with her second husband, to whom she had been legally married for years. Recalling her first return to the eucharist still makes her tear up.

“There’s that special sweetness, and it keeps drawing you in,” she said.

Five years ago, Amanda Ramthun was 19 weeks pregnant when she learned she had a miscarriage. On the way home from a hospital, she and her husband stopped at their church. The Sunday “cry room” for infants doubled as the adoration room during the week, and they went in, with no words, thoughts or prayers.

“We were only there 10, 15 minutes maybe, but just to really feel like you were just sitting at the feet of Jesus, and just pouring it all out — I really felt the ‘Come to me all you who labor and are burdened, and I will give you rest,’” said Ms. Ramthun, quoting Jesus’ promise in the New Testament.

That comfort is a reason people return to the sacrament, over and over.

Back in Washington at the Sisters of Life adoration chapel, Sister Mary Rose Beck rang a small bell. The hour had come to repose the Blessed Sacrament, to move it from exposition to rest.

“Increase my faith, dear Jesus, in thy real presence here, and make me feel most deeply, that thou to me art near,” the sisters sang into the quiet.

Sister Mary Rose walked up to the altar and knelt low. She turned to the tabernacle, a brass vessel behind the monstrance, and opened its small doors carved like a cross.

She then carefully removed the consecrated host from the sunburst at the center of the altar. She placed it in the tabernacle, knelt once more, and turned the monstrance to face the side, signaling that Christ was now reposing.

She closed the tabernacle and locked its door. 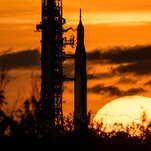 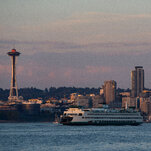 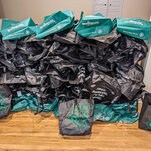 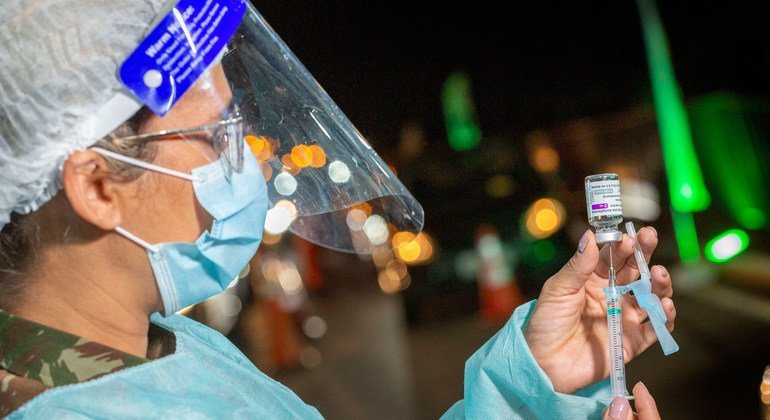